BRITNEY Spears reportedly received an apology from Perez Hilton after he was accused of “bullying” her during her 2007 meltdown.

The celebrity blogger branded the popstar an “unfit mother” during her breakdown and even claimed she should have died instead of the late actor, Heath Ledger.

The TV personality claimed in a chat with Chanel Omari that he reached out to Britney to apologize for his behavior before the documentary aired.

“I have apologized privately recently before the documentary. It was in December,” he said on Chanel’s podcast, Chanel In The City.

“I went through this big emotional break in December and one of the things that I wanted to do, my idea, not even my therapists was, I felt it was important for me…”

He claimed Britney should have died instead of late actor, Heath Ledger

Perez went on: “It’s kind of like the things that people often do in 12 step programs. They’ll reach out to people that they have wronged and apologize.

“And even though I had apologized before, there’s nothing wrong with apologizing again or differently. So I did. And she was one of the few people that I reached out to in December.”

After the death of Heath Ledger in 2008, Perez released a shirt design on his gossip site with an image of Heath in the film, Brokeback Mountain.

It featured the words: “Why couldn’t it have been Britney?”

Perex claimed he apologized to Britney (seen in 2007) in December

Britney’s fans flooded social media with their outrage at Perez’s actions after watching her Hulu documentary, which was released earlier this month.

“Have you apologized to Britney Spears for all of the horrible things that you said about her? You lack professionalism and you need to apologize,” one viewer insisted.

Another added: “He needs to canceled by The Cancel Culture. He regrets getting called out.”

Elsewhere in the podcast, Perez discussed Britney’s conservatorship and said her father should not have control of her financial and personal assets. 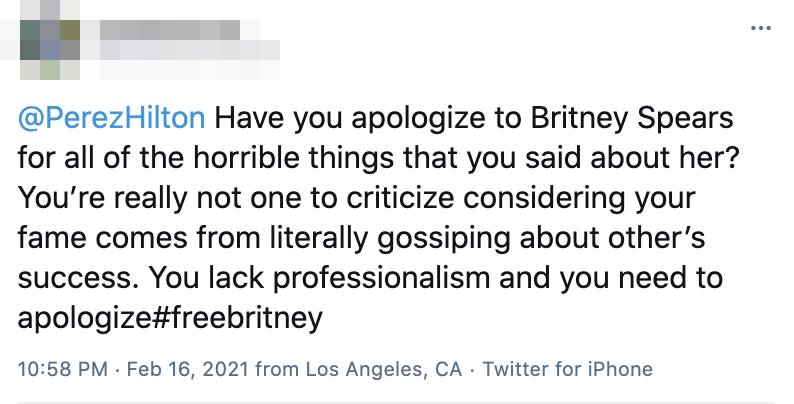 “I do not believe that Britney Spears is not being held against her will. I do believe that she’s unhappy with certain aspects of the conservatorship,” he said.

“I absolutely feel that her father should not be her conservator. She does not want him in that role anymore.

“And we’ve learned so much about him. That should be obvious to anybody that the role that he served has run its course and it’s time for him to stop.”

Jamie had been Britney’s conservator since 2008, after she had a public meltdown, during which she shaved her head and attacked photographers.

Last week, an LA judge ruled that he will no longer have sole control of her multi-million dollar fortune.

The Sun exclusively revealed that Britney is now “100 percent confident she will take back control of her life again.”

She is “sure” she will soon be able to make decisions about her estate and personal life, especially so she can marry her boyfriend, have more children, and return to singing.